Site location of project is in Nir, Yazd province at the center of Iran that the climate conditions highly suitable for the purpose of Photo voltaic Plant Establishment.

The province has one of the greatest electricity facilities in Iran. There are several noticeably high capacity thermal power plants in the province. However, since Iran is located in a desert region, it suffers from water resources shortage. As many of thermal power plants, either steam turbines or combined cycles, use a lot of water to generate electricity, and also Yazd province imports water from other neighboring provinces such as Isfahan, a PV plant located near consumers with respect to magnificent conditions for establishing PV plants in Yazd province, it could lower the amount of consumed water in the region. In addition, as high peak of electricity consumption in the district is at noon, a PV plant could cope with electricity peak demand. 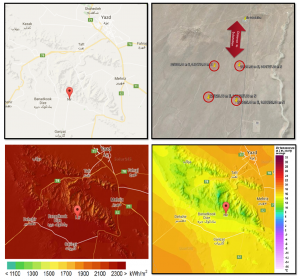